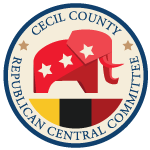 CECIL COUNTY - Vincent Sammons, former Vice Chair, has been elected as the new Chairman of the Cecil County Republican Central Committee by a unanimous quorum vote at our May meeting. Vincent replaces former Chairman David Woodruff who resigned in May for a career opportunity. Ron Lobos will become the new Vice Chairman and was elected by a unanimous quorum vote at the same meeting. Both of these men are hardworking and loyal supporters of the Republican Party.

The Central Committee is also looking for registered Republicans to nominate to the Board of Elections. The Board of Elections is responsible for overseeing the conduct of all State and Federal elections in Cecil County.
The responsibilities for this position include ensuring that the election process is conducted in an open, convenient, and impartial manner according to State laws and regulations. If you are interested in applying for this position, please contact Vincent Sammons at info@CecilGOP.org.